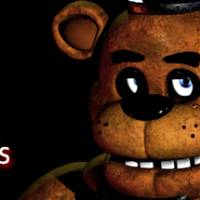 Five Nights at Freddy's is an indie point-and-click survival horror video game developed by Scott Cawthon and released through the Desura distribution service. It is a single player game that centers on a pizza restaurant haunted by robotic versions of the mascots from the 1980s children's TV show, Chuck E. Cheese's. The player must use various tools and objects to stay alive and fend off the haunted animatronic characters.

The Five Nights at Freddy's game is a horror-based game that challenges players to survive from 12am to 6am in their own office building where the only defense they have is a security camera left for them by the night guards. The game starts off with a tutorial night, in which the player learns how to use the game, and then advances to the five different night stages in which the player must survive until morning.

The graphics have a very simplistic style and color scheme, with more of a focus on the characters and their surroundings rather than the scenery. For example, when the player is in the pizzeria and is looking at the "stage", the stage's contents (such as the animatronics) are not seen, but their silhouettes are drawn in. The game also features an eerie sound to go along with the graphics.

The replay value of Five Nights at Freddy's is that it can be played over and over. With each playthrough, the player will discover something new about the game.

This game is a fun horror game that anyone can enjoy. It's a great game for anyone who's into horror games. It's not for the faint of heart though.